Cyclops, a huge nuclear-powered bus, is about to make its maiden voyage - a non-stop trip from New York City to Denver, Colorado. The presentation of the car to the journalists is cut short when explosion destroys part of the facility. Cyclops was not damaged, but the driver, who was suppose to take it to Denver was injured. Professor Irwin Baxter, who designed the bus, is desperate to find a replacement driver, which will not be easy - Cyclops is a very complicated vehicle and it takes time to learn how to operate it. There is one man, who could save the situation, experienced Dan Torrence, but Kitty Baxter, professorâ€™s daughter, will not hear of it. Dan broke her heart in the past and is the last person she would like to meet again. But in current situation she has no choice and soon Dan Torrence becomes part of the team. There is one problem though, people, who caused the explosion are determined to stop Cyclops at any cost. And Dan Torrence has a dark mystery in his part - only he knows what really happened on Mount Diablo years ago...

One of the early parodies of popular in 1970s disaster movies (not to be mistaken with disastrous movies), which shown with great detail how people are dealing with drastic situations, like being trapped in skyscraper on fire, in sinking cruise ship or airplane that is doomed to crash. Here we have a nuclear-powered bus, multiple subplots, interesting cast and quite entertaining comedy. The Big Bus failed to find audience after premiere, although its idea and style could have been behind success of further parodies, such as Airplane!. 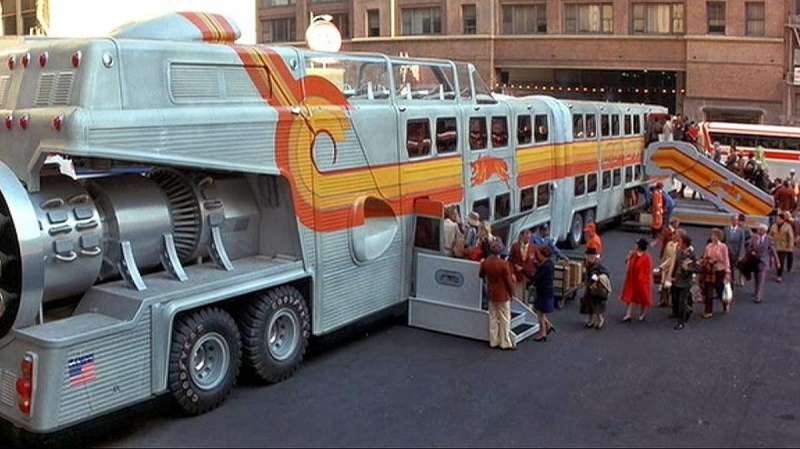 Creators of The Big Bus

Cast of The Big Bus

Trivia about The Big Bus