In 1925. the government of the young Soviet Union, which mourns the dead before the year of Lenin, wants to celebrate the 20th anniversary of the 1905 revolution and ordered the young director make a film. The presented monumental project Eisenstein selects only one episode (in the original shooting script he was about 50 lines) - the revolt of the crew of the battleship "Prince Potemkin" in Odessa port. Then he did the film classic tragedy, divided into five acts.

The first act "People and maggots". The crew refuses to eat, which is broken and grubby, sailors, led by the boatswain, and the officers and shipâ€™s doctor and seem to ignore the facts of the opinion that the food is good. In the face punishment for insubordination some sailors disappear, but others do not.

The second act of "Drama at the stern." Those who refused to eat are arrested and sentenced to death. On board are facing a firing squad, but refuse shooters to shoot them. This is a signal for revolt. The crew takes over the ship, killing the officers, and the doctor thrown overboard.

The third act of "Appeal dead". During the confusion killed the leader of the rebellion - boatswain. The ship enters the port of Odessa and the body was laid in the dock. The crowd wants to pay tribute to celebrate about and show support for the rebels.

The fourth act "Stairs in Odessa". Arrives Cossacks to quell the rebellion. Soldiers shoot an unarmed crowd, killing men, women and children. Serried ranks descend the stairs. When the battleship fired artillery shells towards the Cossacks, the ship reaches the message that was sent to quell the rebellion fleet.

Fifth act of "Meeting with the tsarist fleet." Battleship and his crew have put up a red flag and exits to face nadpĹ‚ywajÄ…cym individuals. However, when they have crossed the road, sounded friendly cheers and "Prince Potemkin" sailed without a single shot.

This is the biggest and most famous film in the history of cinema. This is the debut of 27-year-old Sergei Eisenstein. Masterpiece, perfectly assembled, you can write a whole story about how to deal with the movement and assembly, among others, scenes were filmed moving camera. In terms of the pace of the narrative exceeds about 70 years later videos. This film became an instant classic in the USSR, although in Europe it did not raise such strong emotions, even though gained awards went to the cinema much later, and mainly to study cinema. Had a profound impact on countless films that were shot after him. 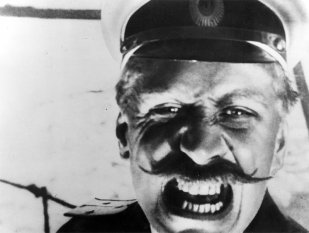 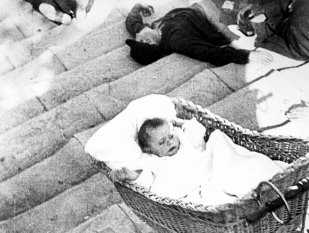 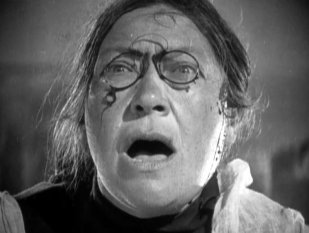 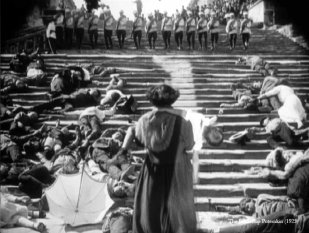